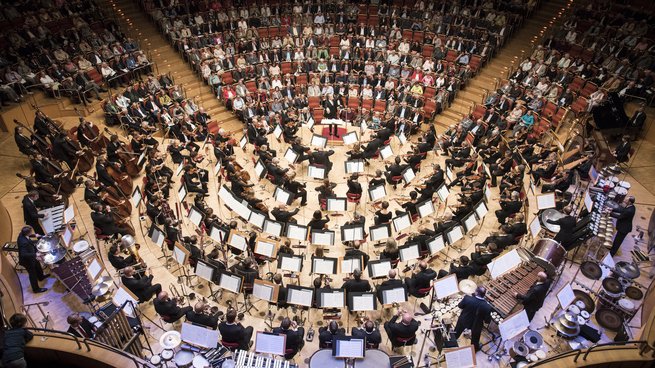 The Gürzenich Orchestra is deeply rooted in Cologne and yet cosmopolitan at the same time. It stands for ground-breaking interpretations, innovative programmes and a great diversity of events that take place beyond the concert hall. As one of Germany’s most prominent concert and opera orchestras, it has a unique tradition that has written music history.

The orchestra was founded in 1827 by the Concert-Gesellschaft, though its history can be traced back to the medieval Musikpflege in Cologne. Since 1888, the Gürzenich Orchestra has been the Orchestra of the City of Cologne. It plays approximately 50 concerts per season for more than 100.000 enthusiastic listeners. As the orchestra of the Cologne Opera, it takes part in about 160 performances per year.

In the season of 2015/16, François-Xavier Roth became Gürzenich-Kapellmeister and Generalmusikdirektor of the City of Cologne, thus joining an array of prominent predecessors: Ferdinand Hiller (1850–1884), Franz Wüllner (1884–1902), the honorary conductors Günter Wand and Dmitrij Kitajenko, and, since 1986, the chief conductors Marek Janowski, James Conlon and Markus Stenz.

François-Xavier Roth und his stunning Gürzenich Orchestra let the music speak to us.

The Times about The CD with Mahlers Symphony No. 3

Maybe I found a musical home here in Cologne (...), the Orchestra is delightful, it's a real pleasure ...

Gustav Mahler, in a letter to his wife Alma

It is with pride that the Gürzenich Orchestra looks back on its great history, a history which serves as inspirational backdrop for the orchestra to pass on its own story while continuing to live it. Outstanding works by Romantic composers such as Johannes Brahms, Richard Strauss and Gustav Mahler were premiered by the Gürzenich Orchestra. Today, this grand heritage encourages the approximately 130 musicians and the orchestra’s conductors to interpret tradition in an innovative way and to be bold and imaginative in building bridges to the music of our times. The list of major contemporary premieres is impressive, and the orchestra never ceases to investigate, while continuing to encourage open-mindedness in its audience.

The Gürzenich Orchestra is an orchestra for everyone, eager to jump right into the centre of society – leaving the traditional concert hall behind – and inspire people with its creativity. This, too, is part of its self-conception. To achieve the goal of bringing music into the lives of people in very different situations, the orchestra performs in retirement homes and kindergardens, carries out workshops and school concerts, offers family discounts and the possibility to play in the Cologne Citizen’s Orchestra. On the web, the Gürzenich Orchestra can be experienced in the GO Plus livestreams as well as in podcasts and videos. Award-winning CD recordings are document of its uniqueness and allow the orchestra to shine across the world as cultural ambassador to the city of Cologne. 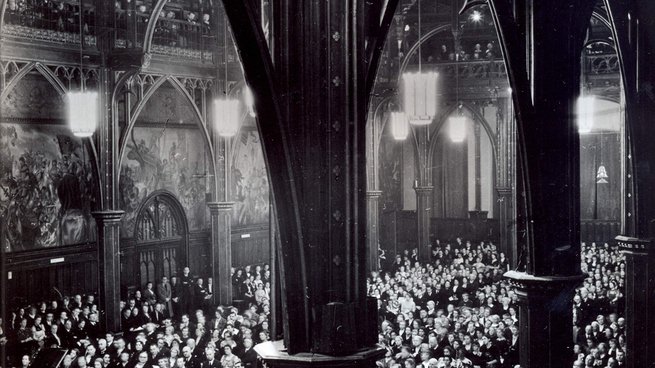 Concert at the ancient hall »Gürzenich«, 1924