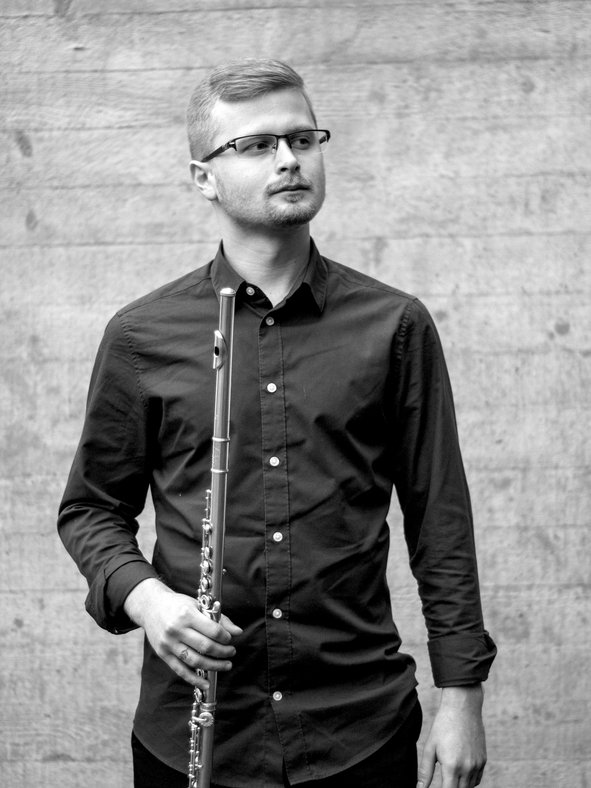 Fedor Kalashnov is currently a member of the Orchestra Academy of the Gürzenich Orchestra Cologne. He is a scholarship holder of the Dr. Carl Dörken Foundation, the Rotary Club Aachen-Frankenburg and the Yehudi Menuhin «Live Music Now« Foundation.

In Russia, Fedor attended the Gnessin Academy of Music with Prof. Albert Gofman, who was the first flutist to record all of Shostakovich's symphonies with the Moscow Philharmonic Orchestra. From 2018 to 2019 Fedor played as a piccolo flutist in the Moscow Musical Theatre »New Opera«. Since 2019 Fedor has been studying at the Hochschule für Musik und Tanz Köln in the class of Prof. Aldo Baerten.

During his studies Fedor won various flute competitions, such as Gazzelloni International Flute Competition 2018 (2nd prize and Köhler Prize), Dutch International Flute Competition (Grand Prix), University Internal Competition 2020 (3rd prize). In 2022 he participated in the live rounds of the Nielsen Competition and passed the audition with the famous Verbier Festival Orchestra. In addition to his solo career, Fedor often performs as an organiser of various flute events. In 2019 he was the main organiser of the Miyazawa Days in Russia, sponsored by the Miyazawa Flutes. In 2022 he took part in a tour of Russia and gave master classes and solo concerts at the most famous Russian conservatories and music academies.

Currently Fedor Kalashnov gives concerts together with his permanent pianist Kristina Zelenina in Russia, Belgium, Netherlands, Italy, Romania, Lithuania, Poland and Denmark. In Germany, his performances both as a soloist and with orchestras take place monthly in NRW.